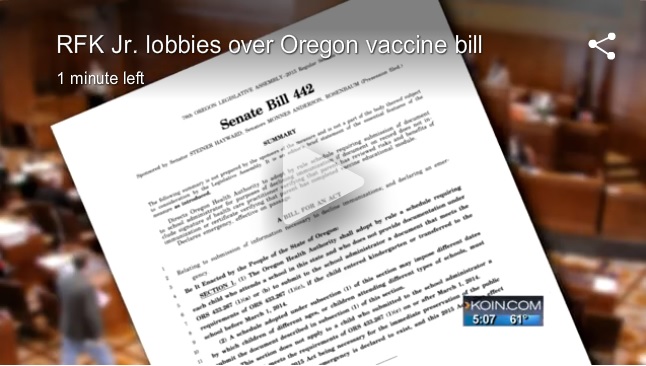 He is urging lawmakers to vote against the bill that would eliminate non-medical exemptions.

“I don’t think it’s appropriate to force people to undergo, to have their children undergo a medical procedure in this country,” Kennedy told KOIN 6 News. “I think it’s against the tenets of our country.”

RFK believes all parents should have the right to choose whether to vaccinate their children, something Senate Bill 442 would drastically limit.

That bill calls for the elimination of all non-medical exemptions.

On Sunday, Kennedy reached out to Sen. Tim Knopp, R-Bend, via email.

“He considers the issue so important he wants to come to Oregon,” Knopp said. “He is a Democrat, I am a Republican and this issue crosses party lines, because to me the issue isn’t about vaccines. It’s about freedom.”

Kennedy will also screen a documentary called Trace Amounts about a mercury-containing preservative in some vaccines. The film, according to their website, “… is the true story of Eric Gladen’s painful journey through mercury poisoning that he believes resulted from a thimerosal-loaded tetanus shot. His discoveries led him on a quest for the scientific truth about the role of mercury poisoning in the Autism epidemic.”

The film will be shown at Cinebarre in downtown Salem, and Kennedy plans a question-and-answer session afterwards.

The film dissects the controversy fueled by the possible dangers of vaccines, Kennedy said.

“It talks about the problems at the CDC, which are well documented. This is not something that I’m the first one to talk about.”

He also said the CDC is “a sausage factory.”

His book about a preservative in vaccines fuels the ongoing debate that is influencing events in Salem.

Senate Bill 442 was pulled from the legislature’s agenda Thursday, news Kennedy was pleased to hear.

“We need to make sure citizens and the informed citizenry can say no when they need to say no to protect their children,” Kennedy said.