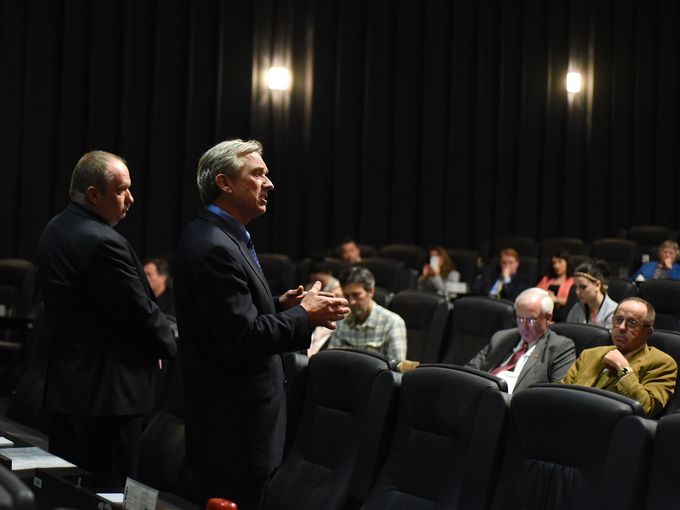 Robert F. Kennedy Jr. made it clear from the beginning.

He’s pro-vaccine. All of his six children have been vaccinated, and so has he, he says.

Yet the longtime environmental activist Thursday stood before a small crowd of Oregon lawmakers, staffers and opponents of a bill that would eliminate personal-belief exemptions from school immunizations, speaking about vaccine toxicity, the trillion-dollar pharmaceutical industry, and a federal public health agency he calls corrupt and troubled.

He showed the documentary “Trace Amounts,” which centers on mercury in vaccines and its relationship to autism, at Cinebarre in downtown Salem. The documentary also accuses government researchers and public health agencies of corruption and fraud.

Kennedy made the trip to Salem with one goal. To influence lawmakers to vote against Senate Bill 442, the vaccine mandate bill.

If it passes, parents will be able to opt out of their child’s vaccines only if they have a medical reason, backed by a medical provider.

“We can’t solve a credibility problem by forcing people to undergo a medical procedure without informed consent,” Kennedy said before the event.

Kennedy’s main complaint about vaccines is that they contain thimerosal. The mercury in these shots are making children sick, and in some cases causing their autism, he said.

The mercury-containing preservative has been phased out of most vaccines, except for flu shots, which are recommended for pregnant women.

U.S. Centers for Disease Control and Prevention has maintained that there was no convincing evidence that thimerosal in vaccines causes harm. A CDC fact sheet summarizes 10 studies that show vaccines have no links to autism.

Kennedy was accompanied by Brian Hooker, a California biomechanical engineer. Hooker wrote a reanalysis of a 2004 research that found no links between the measles, mumps and rubella, or MMR, vaccine and autism. In the paper, Hooker accuses the CDC of covering up data that showed black boys had a 3.4 times greater risk of autism associated with the MMR vaccine.

Hooker’s study, which was published in Translational Neurodegeneration in October 2014, has been retracted. The retraction statement reads that “post-publication peer review raised concerns about the validity of the methods and statistical analysis, therefore the Editors no longer have confidence in the soundness of the findings.”

Despite that, Hooker’s findings continue to be used to argue against vaccines.

Kennedy said that he premiered the documentary in Los Angeles and that the screening in Oregon is the first of several he is planning for an audience of policymakers. He plans to show the film in California, Washington, New York, Illinois, and Washington, D.C., he said.