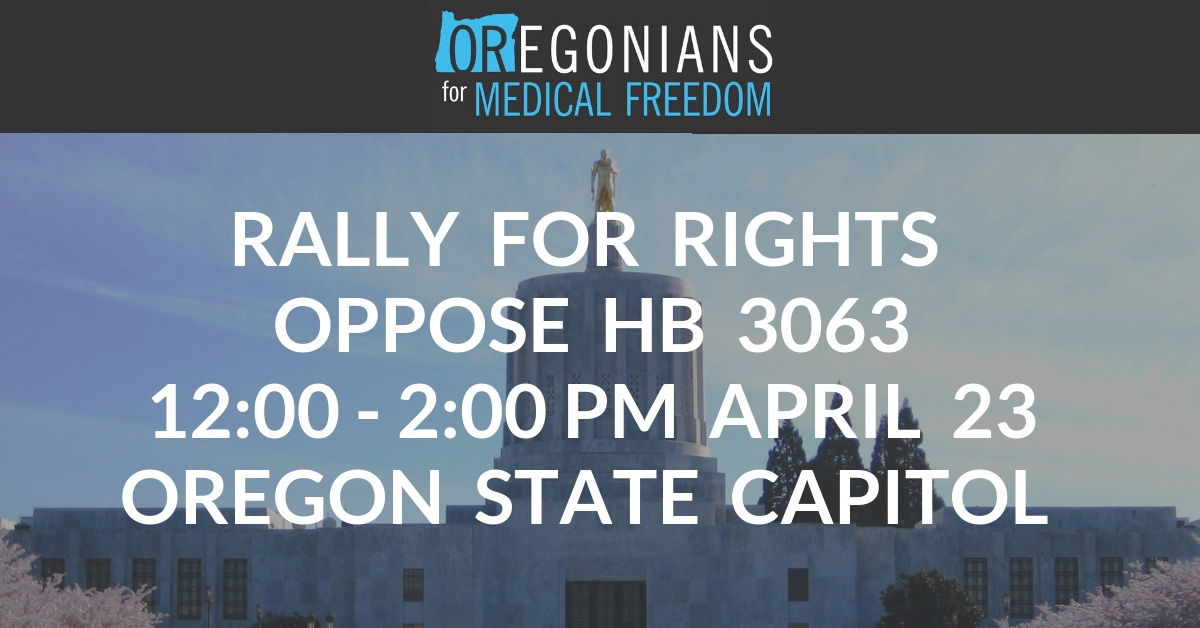 Oregonians for Medical Freedom is hosting a Rally for Rights—in support of education rights, religious rights and civil rights—at the Oregon State Capitol this Tuesday, April 23, from 12:00 p.m. to 2:00 p.m. The rally is for those who oppose House Bill 3063 and will be located on the State Capitol Steps. If passed, HB 3063 would remove personal belief exemptions for vaccines and would ban any child aged six weeks through 12th grade from attending any licensed childcare facility, preschool, public, private or charter school if the child is missing even one of the more than 30 recommended doses of vaccines now on the recommended school schedule. Under HB 3063, children would also be excluded from all after-school sports, extracurricular activities and per the bill language would not be allowed to be in the same space as “other individuals.” This bill would even seek to prevent children who are not fully-vaccinated from attending a school choir performance, play or sports game for their fully-vaccinated siblings.

Rally for Rights speakers include, Del Bigtree, Emmy award-winning TV Producer of the daytime talk show “The Doctors,” founder of the Informed Consent Action Network and current host of the popular internet talk show The HighWire, James Lyons-Weiler, Ph.D., founder of The Institute for Pure and Applied Knowledge, a not-for-profit organization which conducts and publishes independent and objective nonpartisan scientific analyses, studies, and research on legislative issues that impact public health and scientific progress, Mary Holland Esq., Professor and Director of the Graduate Legal Skills Program at New York University School of Law and graduate from Harvard and Columbia Universities, Paul Thomas, M.D., Dartmouth-trained pediatrician and board-certified fellow of the American Academy of Pediatrics with 15,000 patients in his practice Integrative Pediatrics, Jennifer Margulis, Ph.D., award-winning science journalist and best-selling author, Oregon State Senators Kim Thatcher and Dennis Linthicum, Spokesperson Jonathan Lockwood (Thatcher, Linthucum and Representative Bill Post), and several others who will speak out in opposition of HB 3063 and the bill’s effort to drive an exclusionary, discriminatory and personal freedom, religious and education rights-violating agenda forward.

Prior to the Rally for Rights, all legislators are invited Tuesday to attend an earlier 2019 Policy Roundtable on HB 3063 where legislators and their staff were invited earlier this month to come and hear a short presentation from several leading legal and medical experts that will speak at the rally and engage in a discussion about HB 3063 and vaccine mandate policy. Efforts were made to include Oregon Health Authority officials and other medical organizations in the discussion who have shown support for HB 3063.

HB 3063 would immediately impact over 35,000 children and create undue hardship for families—including single and low-income households—across the state of Oregon who will be denied access to childcare and the ability to receive a public or private education with their peers and neighbors. Instead, families would be forced to homeschool, attend an isolating online public school or move out of state. Free and appropriate education will be denied to children currently on Individualized Education Plans (IEP’s) and students with disabilities if they are missing any of the required doses.

Currently, there are 47 other states that allow for a religious or personal belief exemption to a vaccine in addition to medical exemptions, which have an extremely small list of medical conditions that qualify as grounds for requesting a medical exemption.

If HB 3063 passes, Oregon would become the fourth state to eliminate all ability to make personal belief and religious choices about vaccines, leaving parents who need their child to attend school or daycare no choice unless they qualify for the very narrowly defined medical exemption, and children whose religious beliefs are violated by use of some of the controversial vaccine ingredients derived from human fetal cell tissue lines. Children who have had adverse reactions to a vaccine and suffer from vaccine injury may not qualify for a medical exemption as their adverse reaction must be severe enough to be granted approval by OHA, not the child’s practicing doctor. The coercive nature of holding a child’s education hostage removes a family’s full right to free and informed consent over private medical decisions that should be made individually with their physicians.

Medical exemption expansion is also not an acceptable compromise to this bill. Oregon State Senator Elizabeth Steiner Hayward (D), an outspoken supporter of this bill, has stated that doctors who write too many medical exemptions will be investigated. California State Senator Richard Pan (D), who introduced CA Senate Bill 277, a broader vaccine mandate law, which passed in 2015, the same year that Steiner Hayward also tried and failed to pass SB 442, a similar bill in OR, promised that CA would maintain a robust medical exemption process that allowed family doctors to look at individual medical history when they took away non-medical exemptions. However, now Sen. Pan is trying to pass SB 276, a bill that would require exemptions to be approved by CA State Health Department for a stringent list by the Centers for Disease Control approved contraindications. Currently, there are medical exemptions granted under SB 277 in use by thousands of CA families who would have their medical exemptions revoked if SB 276 passes this legislative season. How do we know the same wouldn’t happen in OR if HB 3063 passes? Both Senators Pan (2012) and Steiner Hayward (2013) promised on their respective Senate floors years prior not to remove fundamental parental rights when it comes to parents making medical decisions for their children.

• There is NO medical emergency in Oregon, yet this bill has an emergency clause and if passed, would “go into effect immediately” and force families to decide whether to fully comply and “catch up” or find an alternative way to educate their children.

• Oregon Vaccination rates remain high with 97% of families choosing some or all vaccines. Many of the 2.6% who remain fully unvaccinated are families with other children or loved ones with a history of vaccine injury or adverse reactions that make them more susceptible to adverse reactions and injuries from a vaccine.

• Under current Oregon process through the Oregon Health Authority those with prior vaccine injury would not, however, be able to receive a medical exemption and currently rely on non-medical exemptions that would be removed under HB 3063.

• In 1986 Congress agreed to indemnify vaccine manufacturers from and against civil liability for injury or death related to a vaccine as part of the National Childhood Vaccine Injury Act (NCVIA).

• Between January 1, 2019, and April 1, 2019, the US government has settled 276 cases and awarded over $131 million to vaccine injury victims; since the NCVIA established the National Vaccine Injury Compensation Program (NVICP), the total payout has been over $4 billion.

• A 2011 Harvard Pilgrim Health study commissioned by the CDC found that less than 1% of vaccine adverse events were ever reported to VAERS.

• VAERS data reports for Oregon in 2018 show 579 total adverse reactions reported including four deaths, 16 disabilities, four life-threatening reactions and 19 hospitalizations. Taking into account the 2011 Harvard Pilgrim Health study mentioned above, the total number of reactions could be under reported by as much as 99%.

• All four pharmaceutical companies who manufacture all 72 childhood vaccines are convicted felons who have collectively paid over $35 billion over the past decade in civil and criminal penalties for bribing, extorting, and lying to doctors and defrauding regulators to promote other pharmaceutical products.

HB 3063 was referred out from the House Committee on Health Care and has been sitting with the Joint Committee on Ways and Means for several weeks. Early Monday it was assigned to the Joint Subcommittee on Human Services, and is scheduled for a public hearing and work session on WEDNESDAY April 24, at 8:30 a.m. in Hearing Room F at the Oregon State Capitol.

Our conduct policies are very clear: we can, have, and will continue to disavow and disassociate from anyone who may engage in behavior inconsistent with our standards of professional discourse (please visit the link to the full press release statement about OFMF conduct policy).