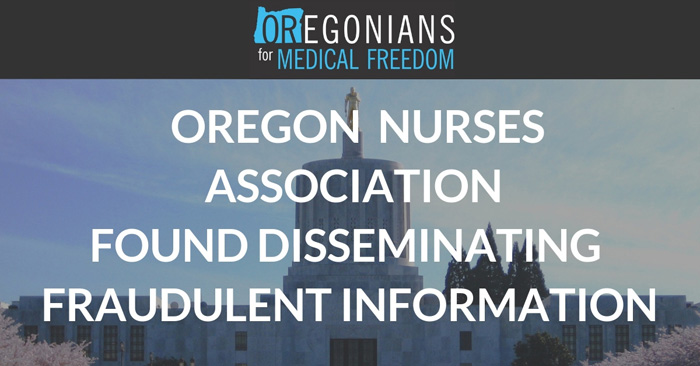 A Cease and Desist letter was issued on behalf of Oregonians for Medical Freedom to the Oregon Nurses Association (ONA), by Luke D. Miller, part of the legal counsel team for OFMF, who are still awaiting a formal response. The letter states that ONA may have engaged in unlawful activities in violation of Oregon’s Lobbying Regulation pursuant to ORS 171.764, and may also have committed certain defamatory activities such as Libel, Libel per se, and False Light.

Thursday in a press release calling out more than a dozen pieces of mis- or disinformation claims being used by proponents to lobby in favor of House Bill 3063, OFMF outlined the ONA spread of disinformation including proof of their dissemination of fraudulent email communications that had been distributed to countless contacts and ONA members publicly trying to gather support for the proposed vaccine mandate.

The ONA, one of the largest lobbying efforts pushing for the passage of HB 3063, sent their fraudulent e-mail on Tuesday, April 30th, that mislead their members stating, “this bill DOES NOT take away a parents’ rights to make decisions about their children’s healthcare—it only requires that children be vaccinated against measles in order to attend school to protect the health of other students, teachers, staff, and our community.”

The Cease and Desist letter to ONA demanded (1) for an immediate cease and desist disseminating any such false statements and/or misstatements of material fact regarding the Vaccine Mandate; (2) that ONA issues a public retraction of the April 30, 2019, e-mail communication; and (3) that ONA publicly apologizes to Oregonians for Medical Freedom and the other opponents of the Vaccine Mandate. 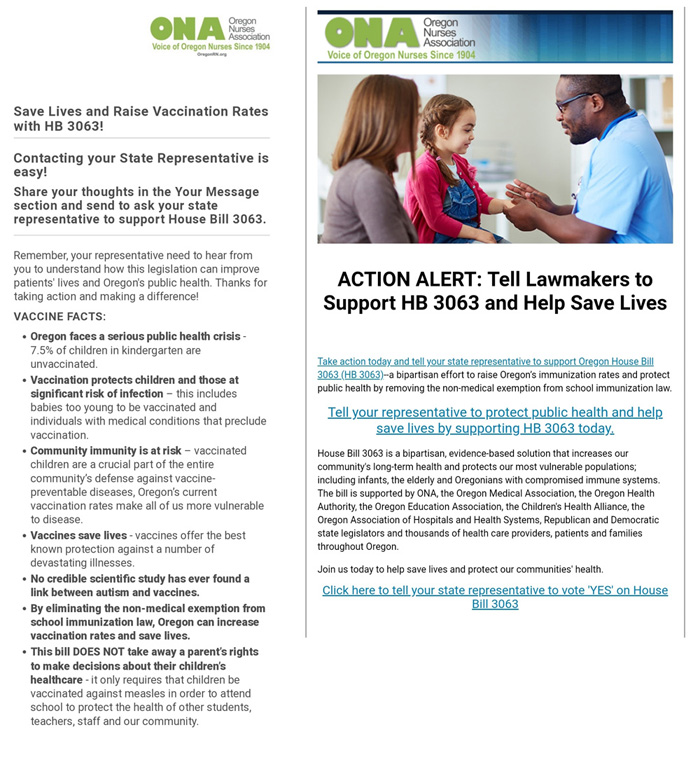 The ONA is one of the largest campaign donors to legislators who have sponsored Oregon House Bill 3063. Every single co-sponsor but one has received combined a total of $255,000 in campaign donations from the ONA. Due to an Oregon Supreme Court decision in 1997, Oregon is one of a handful of states that does not limit campaign contributions.

Amber Sims, with Oregonians for Medical Freedom said, “the Oregon Nurses Association, an organization which lists ‘integrity’ as a core value, should apologize to legislators and the public. Oregonians across the state want to know that the people that they elect will represent their best interests, and make informed decisions with factually accurate information. When respected professional associations make misleading statements of fact, with the intent to influence votes that would benefit their interests, we hope they would take responsibility to immediately correct this false information.”

“It concerns me greatly that the association I support financially is spreading fear and inaccurate information,” said Kristy Torpey RN, BSN. “There are potentially hundreds of nurses who have children with disabilities or chose to give vaccinations on an alternative schedule. They will be heavily impacted by this legislation and have no choice but to leave the workforce. The language of this bill violates the Nurse’s Code of Ethics. It’s antithetical to all that ONA stands for and I will be submitting a request to cancel my membership due to their actions.”

“ONA caused the Fraudulent E-mail to be delivered which contains numerous false statements and/or misrepresentations of material fact regarding the Vaccine Mandate. As a result, ONA may be liable for substantial damages and/or government sanctions which, in turn, could place ONA’s tax exempt status with the IRS in jeopardy,” part of the letter reads.

The list of false statements or misrepresentations of “material fact” regarding HB 3063 included the following “most egregious” examples stated from the letter:

1) The ONA Fraudulent Email claims that the Vaccine Mandate “DOES NOT take away a parents’ rights to make decisions about their children’s healthcare . . .” which is patently false. The Vaccine Mandate removes specific mechanisms, such as the philosophical and religious exemptions, by which parents may opt out of certain vaccinations, substantially restricting every parent’s right to make significant decisions about their children’s healthcare. There are numerous medical reasons why a parent may choose to exercise their philosophical or religious right to opt out and/or delay certain vaccines.

3) Furthermore, the Fraudulent E-mail claims “7.5% of children in Kindergarten are unvaccinated” which again is patently false. According to OHA data, 7.5% of Oregon kindergarteners merely file an exemption form from certain vaccines—making the vast majority of the referenced 7.5% number only partially vaccinated—not unvaccinated as claimed. In reality, only 2.6% of students throughout all of K-12 education are truly unvaccinated.

4) Additionally, the Fraudulent E-mail claims that “No credible scientific study has ever found a link between autism and vaccines” which again is patently false. There is numerous credible scientific evidence that there is a link between vaccines and a diagnosis of autism. In a sworn affidavit under penalty of perjury, Dr. Andrew Zimmerman of John Hopkins University, the federal government’s top expert witness during a 2007 vaccine case, freely admitted that vaccinations could cause autism in some children. To claim there is no “credible” science on the matter strains credulity itself.

5) Finally, the Fraudulent E-mail claims that “By eliminating the non-medical exemption from school immunization law, Oregon can increase vaccination rates and save lives” which again is patently false. The Vaccine Mandate puts our most vulnerable children at risk of debilitating vaccine injury. For example, medical exemptions are extremely difficult to obtain and are not currently approved for children who qualify based on family history of seizures and autoimmune disorders, which again, are affecting our children at near epidemic rates. Without the ability to access the philosophical and religious exemptions, many children who do not meet the rigorous medical exemption criteria will be critically injured as a result of the Vaccine Mandate.

The cease and desist letter ends with, “If ONA complies with Oregonians for Medical Freedom’s demands, we will not seek to file a complaint with the Oregon Government Ethics Commission pursuant to ORS 171.125, and/or seek court intervention. However, should ONA not comply and/or continue to propagate the same or additional false statements and/or misrepresentations of material fact regarding the Vaccine Mandate, we will not limit ourselves to seek redress for ONA’s activities.”

About Oregonians for Medical Freedom (OFMF)