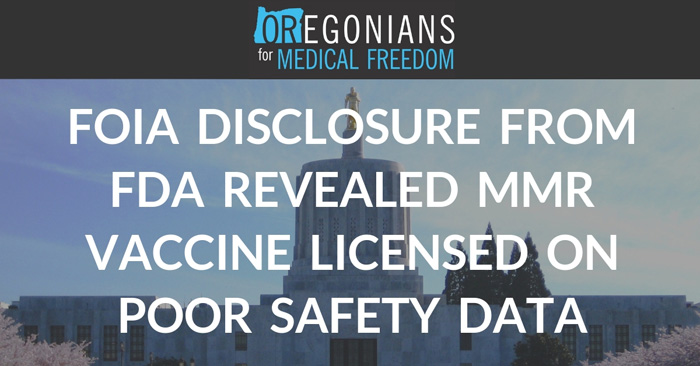 In another significant legal win for vaccine risk awareness non-profit Informed Consent Action Network (ICAN), a new Freedom of Information Act disclosure from the Federal Food and Drug Administration (FDA) has revealed that the MMR vaccine was licensed based on clinical trials which in total had less than 1,000 participants and far more adverse reactions than previously acknowledged.

“It’s alarming that an appeal was required to get this information, but it’s more alarming that every time ICAN prevails in obtaining a FOIA disclosure from the FDA, CDC or HHS, we learn about another serious shortcoming in their duties to assure Americans’ health and health care,” says Del Bigtree, ICAN founder and host of the weekly fact-based medical news show “The HighWire.”

The MMR vaccine is at the heart of the vaccine debate. The following are some of the key facts learned from the clinical trial reports produced by the FDA, which the agency relied upon to license the MMR:

● There were eight clinical trials that in total had less than 1,000 individuals, out of which only 342 children received the MMR vaccine

● The control group received other vaccines for either rubella or measles and rubella, and none of the controls received a placebo (an inert substance such as a saline injection)

“Thanks to the laws in this country that for now at least permit access to various government records, we now know the MMR vaccine was licensed using an irresponsibly small and limited group of children,” says Bigtree.

“But what’s even more alarming is learning about the serious adverse events that were known and acknowledged, yet ignored in order to license the MMR vaccine,” Bigtree adds, noting “This was after only tracking adverse events for 42 days after injection – imagine what they might have found had they tracked safety for three years against an appropriate control, like they do for drugs.”

Robert F. Kennedy, Jr: “The question is, ‘Are we now mandating a vaccine that is worse than the disease?”

The MMR vaccine currently in use was licensed based on clinical trials in which children experienced far more adverse reactions than previously acknowledged.

● Merck is currently in federal court for MMR efficacy study fraud, accused by their own scientists. http://probeinternational.org/library/wp-content/uploads/2014/09/chatom-v-merck.pdf

● The vaccine is not protecting American children from mumps infection in childhood, it is merely delaying it. Researchers confirm a surge in the number of mumps outbreaks in highly vaccinated populations and higher rates of complications.

● From January 2016 to June 2017, health departments reported 150 outbreaks with 9,200 cases of mumps, yet we did not hear in the media about the huge volume of cases reported by the Centers for Disease Control and Prevention (CDC).

● CDC Senior Research Scientist Dr. William Thompson turned whistleblower in 2014 regarding fraud committed in 2004 in an MMR safety study. Oregon legislators should demand Dr. William Thompson be subpoenaed to testify and provide his detailed confession of scientific fraud and cover up at the CDC.

● Dr. Theresa Deisher, in a letter to legislators, shared findings that DNA contaminants grown in aborted fetal cell tissue lines contain fragmented fetal DNA in MMR vaccine can cause autoimmune disorders. The rubella portion of the MMR vaccine contains human derived fetal DNA contaminants of about 175 ngs, more than 10x over the recommended WHO threshold of 10 ng per vaccine dose. No other drug on the market would receive FDA approval without thorough toxicity profiling (FDA follows international ICH guidelines)—this was never conducted by the pharmaceutical industry for the DNA contamination in the MMR vaccine.

● The MMR vaccine causes seizures in 1 in 640 children and 5% of those cases will lead to epilepsy, a permanent brain disorder that leads to recurring seizures.

● As of November 30, 2018, there have been more than 92,844 reports of measles vaccine reactions, hospitalizations, injuries and deaths following measles vaccinations (MMR) made to the federal Vaccine Adverse Events Reporting System (VAERS), including 457 related deaths, 6,902 hospitalizations, and 1,736 related disabilities. Over 50% of those adverse events occurred in children three years old and under.

● According to the National Vaccine Information Center (NVIC), as of January 2, 2019, there have been 1,258 claims filed to date in the federal Vaccine Injury Compensation Program (VICP) for 82 deaths and 1,176 injuries that occurred after measles vaccination. Of that number, the U.S. Court of Claims administering the VICP has compensated 483 children and adults, who have filed claims for measles vaccine injury. One example of an MMR vaccine injury claim awarded compensation in the VICP is the case of O.R. On February 13, 2013, O.R. received the MMR, Haemophilus Influenzae type B, Pneumococcal (Prevnar 13), Hepatitis A, and Varicella vaccines. That evening, following vaccination, she became feverish and irritable prompting her mother to contact the doctor. The doctor advised O.R.’s mom to administer Benadryl and Tylenol for her symptoms. The fever persisted for several days and was followed by a severe seizure resulting in cardiac and respiratory arrest. The cardiac arrest and seizures caused O.R. to develop encephalopathy, kidney failure, severe brain injury, low muscle tone and cortical vision impairment. After several months of inpatient hospitalization, O.R. was discharged home with 24-hour supervised medical care. On November 20, 2017, the court conceded that the MMR vaccine caused her encephalopathy and O.R. was awarded a $101 million dollar settlement to cover medical expenses for the rest of her life.

About Oregonians for Medical Freedom (OFMF)