Oregon’s Pending Vax Bill: Does Anyone Know How It Will Ultimately Work? 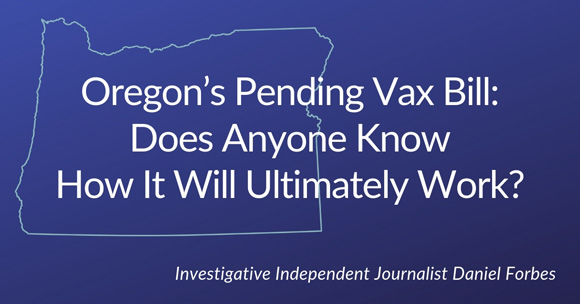 The track’s laid, and coal’s being fed into the train’s firebox, State Sen. Elizabeth Steiner Hayward (D – Beaverton/Portland) manning the shovel as mandatory vaccine legislation for 11 diseases heads for a vote in Salem, Oregon.

The Oregon House of Representatives is slated for a vote on HB 3063 on Monday, May 6. Should it pass the House, where its prospects appear good, the State Senate may vote as early as Thursday, May 9.

And yet no one has a clue how the potential new law – which will require some 21 shots for an unvaccinated toddler heading off to day care – will work once it’s fully in force after August 2020. The requirements prior to next summer are clear. But lawmakers literally do not know what they’re voting on, how the vaccine mandate will be applied after August 2020. The bill leaves it to the Oregon Health Authority to generate the relevant rules.

But OHA, or such at least is its public posture, doesn’t know either. As lawmakers ponder their vote, perhaps they should take their (unstapled) copy of the bill and fling it high. Let the eight pages flutter down to get a good look at them. That might prove as telling as the public hearings they’ve held.

Because, after several hearings, numerous amendments and two “engrossed” versions of the bill’s text, the key issues of the timing and number of mandated immunizations remain unclear after August 2020. And for families who might adhere to the potential law and plan on home schooling their kids only to then suffer a dire change in their circumstances, those issues just might yield people sleeping in their cars – as I’ll explain. Read the full article.