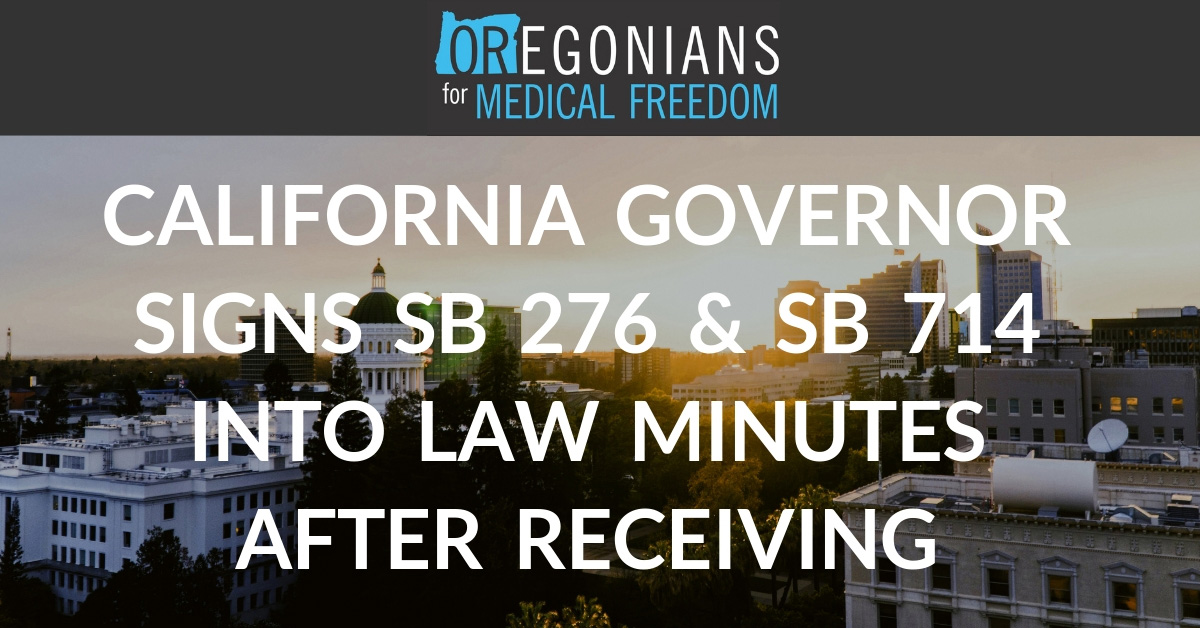 Monday, California Governor Gavin Newsom signed both SB 276 and the companion bill SB 714 into law, just minutes after they hit his desk. It marked an extremely sad day where many in positions of legislative power were on the absolute wrong side of history, despite thousands of pleas from doctors, nurses, educators, parents, grandparents, children and those who believe in the sanctity of the doctor patient relationship, full informed consent without coercion, and a right to an equal opportunity education for all.

“SB 276 as currently written would put school vaccine medical exemptions under the scrutiny of a state bureaucrat, penalizing children and their doctors rather than creating a bill that would specifically target unscrupulous doctors. We estimate the cost of SB 276 to be in excess of $50 million in the first year and in excess of approximately $35 million in each subsequent year, with an additional approximately $650 million potential loss in school ADA and/or approximately $5 billion potential increased healthcare costs. All to go after an extremely small and unquantified number of “unscrupulous” doctors and to mitigate the 11 cases of measles in California children this year. There has to be a better, more cost effective way. SB 276 is not that.” Excerpt from A Voice For Choice Advocacy bill summary.

Hundreds have been holding a strong presence at the CA state capitol in Sacramento since early Monday morning, both inside and outside the building, to do all that they possibly can do to be seen and heard, while some parents, including nursing mothers, were even arrested for their peaceful protests who were held for hours past normal processing times and were denied access to pump breast milk for their children, one of whom is under one year of age who had not been fed since that morning and does not take a bottle!

CA Senator Brian Jones provided this statement on Facebook: “The motto inside the Senate chambers can be interpreted to read, ‘It is the duty of the Senate to protect the liberties of the people.’ Well today my fellow Californians, unfortunately the majority party did not hold true to this. Instead they completely ignored the wishes of families, their children and their doctors, and chose to pass SB714 the companion bill to SB 276, and Governor Newsom wasted no time in signing both of them.”

In an article published on The Vaccine Reaction, Leah Balecha, RN, CCRN, states the following: “Legislators have the professional and moral obligation to protect children and support equality, but Senate Bill 276 by Sen. Richard Pan, which would eliminate almost all vaccine medical exemptions, aims to segregate a minority of children from their right to an education. And even worse, for families who can’t afford homeschooling, SB 276 puts these vulnerable children at higher risk for repeat vaccine adverse events. As a pediatric intensive care nurse for 13 years, I believe in vaccinations and understand the desire for community immunity, but I have also observed many vaccine adverse events that shouldn’t be ignored any longer.”

There have been repeated calls for an investigation into the events following the passage of CA’s SB 277 in 2015, which removed all non-medical exemptions, but allowed for doctors to then additionally look at family medical history, genetics and other important factors for determining a medical exemption going forward, which was specifically promised by the bill’s sponsor Senator Richard Pan. Now, SB 276 actually removes the sanctity and privacy of the doctor patient relationship and puts the state of California between families and their physicians with unelected bureaucrats as the decision makers for ALL medical exemptions.

News reports covered a press conference with human rights attorney Leigh Dundas, a former L.A. District Attorney, who is calling for a Department of Justice investigation. Watch the astounding press conference to hear more unbelievable details of the clear violations that have occurred since 2015.

The video above also includes footage (at the end) of Senator Pan’s testimony for SB 277 in 2015 and the promises he has now completely abandoned.

Listen and watch these insightful words from children’s health advocate Robert F. Kennedy Jr. on one of California’s darkest days, politically speaking, where “by the people for the people” was sadly not upheld by countless politicians.

“All of these legislators in California. We went office to office, and we talked to every single one of them.

We went in and we answered every question. We answered all the lies that Richard Pan has told them. We showed them in black and white: ‘That’s not true.’

They know what they’re doing.” …

Do not despair. We are going to win. Don’t cry. Don’t complain. Don’t give up. ORGANIZE.”